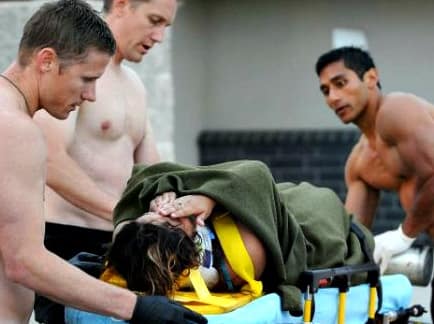 Newport Beach firefighters and lifeguards raced against the setting sun Saturday night to rescue two teenagers who were trapped against the seaside rocks of Corona del Mar by rising tides and rough surf.
A male and female, both 18, had been walking along the rocks of Little Corona Beach when the woman slipped and hit her head, suffering lacerations, said Newport Beach Fire Dept. Capt. Glenn White. The man remained with the woman while a third person was able to walk out before the rising tide and swells of about five feet made it too treacherous. Compounding the problem, the woman could not swim.
At that point, “they got panicky and felt like they were trapped,” White said.
The Orange County Sheriff’s Harbor Patrol was about 50 yards offshore but could not come closer due to the swells. Six firefighters, including two paramedics, and four lifeguards responded to the pair at about 7:45 p.m., just 20 minutes before sunset.
“We were under pressure to get the two out of there as quick as possible,” White said.
The firefighters and lifeguards disrobed and plunged into the water, many shirtless, in gym shorts and without fins. It took about an hour for them to transport the woman out to the harbor patrol boat, swim back to the man and get him to the boat.
The teenagers were transported to Hoag Memorial Hospital Presbyterian, where the woman was in stable condition with lacerations to her head. The man was uninjured.
Each of the firefighters and lifeguards suffered minor scrapes due to the rocks, and one also injured his knee.
White said it is unusual for firefighters to enter the water, but the rising tide forced them to act.
“It was harrowing,” he said. “It was a significant technical rescue.”