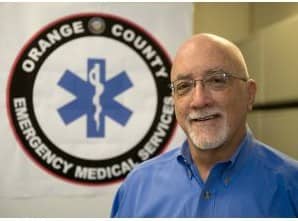 Samuel Stratton, a director at the Orange County Health Care Agency, has been honored for his work in research and developing services for emergency medicine and public health.

Every two years, the World Association of Disaster and Emergency Medicine presents the Award for Global Leadership in Emergency Public Health. The nongovernmental group’s mission is to improve health care in areas including public health, emergency care and disaster relief and preparedness.

Stratton, 65, who lives in Huntington Beach, is appreciative of the award but believes he’s undeserving. At the health agency, he is medical director for its Emergency Medical Services division.

“There are so many great people it could go to. I was just in the right place at the right time numerous times,” he joked.

Originally from Albuquerque, N.M., Stratton said the area he grew up in greatly affected his research areas. He has done much of his research near the U.S.-Mexico border. He is fluent in Spanish. Some of his recent work, done along with the graduate students he teaches at UCLA’s School of Public Health, concentrates on the effects of deportation on women and children. Research like this is controversial, he said, but observing the effects can better document the consequences of those types of events.

When Stratton moved to Southern California in his mid-20s, he said emergency medicine consisted of supervising first responders, including paramedics and emergency room personnel.

Now, it’s more about research that can aid in health emergencies related to natural disasters and epidemics.

During the 2009 swine flu pandemic in the United States that resulted from an outbreak in Mexico, Stratton was on the front lines in both countries.

Even so, he said, it’s just part of the job. Marvin Birnbaum, chairman of the board of directors for the World Association for Disaster and Emergency Medicine, said Stratton has done more for emergency research than Stratton will acknowledge.

“He’s been very instrumental and pretty much been a pioneer for emergency research,” Birnbaum said.

The association presented the award to Stratton in late May at a meeting in Manchester, England.

“He doesn’t look for any rewards. We wanted him to be surprised, and he needs to get a pat on the back once in a while,” Birnbaum said.

On a day-to-day basis, Stratton said he is the final say in approving health projects involving research all over Southern California.

Stratton said his job is less hands-on now than it has been in the past. Though he is a professor, researcher, director at the health care agency and editor in charge of the World Association of Disaster and Emergency Medicine’s research journal, he doesn’t think he deserves the award.

“It’s just about helping people and this job is what I try to do,” he said.