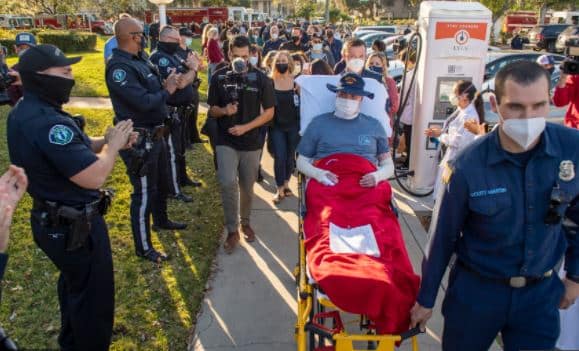 A firefighter who barely survived being overrun by flames while battling an Orange County wildfire last October was released from a hospital to cheers on Wednesday after undergoing more than a dozen surgeries.

Dylan Van Iwaarden sat up in a gurney as he was wheeled out of Orange County Global Medical Center in Santa Ana.

“I’m so thankful for everybody being here for me. It was tragic then, but I’m getting better,” Van Iwaarden said. His arms were bandaged and he wore a hat and mask but deep scars were visible on his cheeks and hands.

His fellow firefighters and members of law enforcement applauded and high-fived him as he was wheeled down a sidewalk to a waiting ambulance.

A parade of fire trucks and a fire department helicopter escorted him to the UC Irvine Medical Center, where he’ll now undergo rehabilitation.

Van Iwaarden told the crowd that he was “ready to get going, get moving on.”