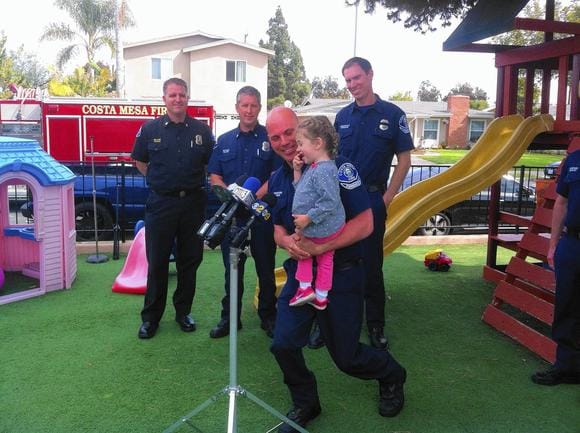 A few weeks ago, Kathy Worthing was feeding a pair of small children at her home day care when she heard a frantic yell.

She immediately called 911.Emma Scott, 2, tried to swallow too much hot dog. Surgeons at Children’s Hospital Orange County (CHOC) would later pull out about an inch and a half worth of cut-up pieces with Emma no worse for wear, but on that Wednesday morning in March she wasn’t breathing.On Friday, Emma and her parents reunited with the paramedics who saved her and got a chance to say thank you.In front of TV cameras and microphones, Emma hugged Costa Mesa paramedic Giovanni La Placa.

When La Placa and an engine crew arrived at the day care center March 19, Emma was limp and without a pulse while one of Worthing’s daughters performed CPR.

Worthing said it felt like 15 minutes but it took less than two minutes for the sirens to arrive in front of her day care.

“It was the prettiest sound I ever heard,” she said.

La Placa and his partner were able to clear enough of the hot dog that Emma could get a small amount of air. Then they rushed her to Hoag Hospital in Newport Beach.

Doctors kept Emma breathing, and she was transported to CHOC later that day for surgery to remove the obstruction.

La Placa said Worthing’s reflex to call 911 without hesitation was the biggest factor in saving Emma.

“As soon as they recognized a problem, they called,” he said. “A lot of times, people wait.”

While holding Emma, mother Anne Scott said there’s nobody else she would have trusted more to take care of her daughter.

“I’ve known Kathy for 30 years, and there’s no place else I would have rather wanted this little angel to be,” she said. “…We couldn’t be more grateful that this one’s still with us and smiling today.”