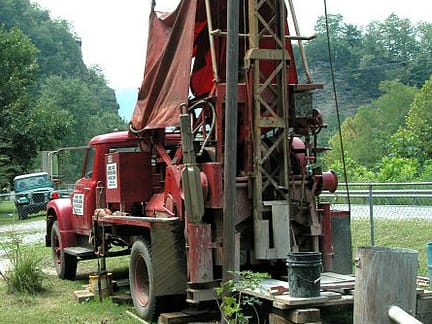 Upon arrival, we noted that a large oil-drilling operation was located at this site. We were met by a worker at the gate who frantically gestured for us to follow his pickup truck. We correctly surmised that this would be no ordinary EMS call.
After proceeding approximately ¼ of a mile inside the complex, we came to a mobile oil derrick. The boom of the derrick was elevated approximately 30 feet high and the entire work site was covered in dust and oil. A 23 year old male patient was lying in the dirt at the base of the vehicle. He was non-responsive, had severe facial injuries and was covered in blood. It was clear that he was a “critical trauma”.
Upon making a primary assessment, it was obvious the patient had an airway problem. Engineer McDowell and FF/EMT McCart placed an OP airway and assisted the patient’s breathing with a BVM and suctioning. As the patient’s respiratory efforts improved, FF/PM Martinez performed a complete secondary survey. He found multiple injuries to the patient’s jaw, arms and chest.
As the treatment team worked, Captain Vasin interviewed the onsite workers in order to obtain the mechanism of injury. Apparently, the patient had been working on a platform near the top of the oil derrick. His job was to add sections of pipe as the drilling operation proceeded. Due to the height of the platform, the patient was wearing a safety harness. At the time of the accident, the harness became entangled with the rotating drill. It subsequently wrapped around the patient’s arms, neck and jaw, inflicting severe crushing injuries and trauma. Upon seeing the patient trapped, the workers cut the strap, lowered him to the ground and called “911”.

During the rescue operation we had several challenges. We were working in an extremely dusty area with a high potential of contamination to the patient’s wounds. The patient had an airway problem coupled with a possible C-spine injury. It was difficult removing the patient’s safety harness and clothing, while maintaining full spinal precautions. In addition, the radio medic, FF/PM Voss had difficulty making contact with the base hospital due to the presence of a nearby bluff which overlooked the job site. Finally, we were surrounded by several distraught co-workers, one of whom was the patient’s father.

After securing the patient to a backboard, he was placed in the responding CARE ambulance. While en route to Western Medical Center, FF/PM’s Martinez and Voss performed an IO and assisted the patient’s breathing. They noted purposeful movement and stable vital signs, but the patient remained unresponsive with severe bleeding compromising his airway.

After reaching the hospital, patient care was transferred to the medical staff. MQ83 and MM83 finished assignment wondering what the ultimate outcome would be for this young man. A few short weeks later, we answered a knock at the door of the fire station. The visitor was our patient who had stopped in to thank us for our efforts. We were pleased to learn that our pre-hospital teamwork had contributed to his full recovery!